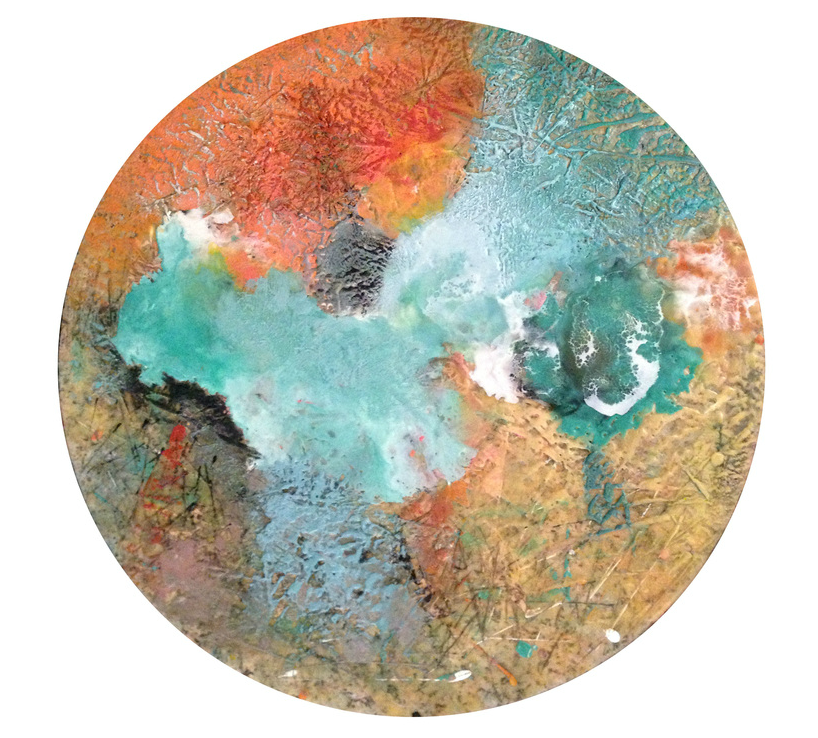 $825.00
Add to Cart
Encaustic, 24 in. diameter, 2016
Carolyn S. Goodridge
BIO
Carolyn Sharon Goodridge, born on October 21, 1960, in Port of Spain, Trinidad, West Indies, immigrated to the U.S. in 1963. She developed skill in Yoga under the guidance of her teacher Ma Prem at the Carnegie Hall Yoga Studio; became widely read in the Eastern religious philosophies of India, and landed in the Korean Zen Buddhist tradition by age 19. Zen Master Seung Sahn Sunim taught the artist about “Zen mind.” Her artwork is inspired by these teachings.

The progression of the three abstract paintings series, Zen of Zero Point, Age of Enlightenment, Om, Cosmology of Now and Dimensions of Being are inspired by a fusion of ideas and theories: Masaru Emoto's water messages; Edward Maryon's Marcotone Sound Color Theory, and Rupert Sheldrake's morphic resonance theory. Some paintings are visualizations of particle physics meeting string theory, attempting to realize the nature of matter and personal reality.

Statement
"Multiverse is an infinite realm of being or potential being of which the universe is regarded as a part or instance." - Online Dictionary

"The multiverse (or meta-universe) is the hypothetical set of finite and infinite possible universes, including the universe we live in. Together, these universes comprise everything that exists: the entirety of space, time, matter, energy, and the physical laws and constants that describe them." - Wikipedia

"This very tactile piece consists of lines, marks, a multitude of surfaces as expressions of things that have come to be. What things? Any thing. What moment? Any moment!"
- Carolyn S. Goodridge
Colonial Beach, Virginia