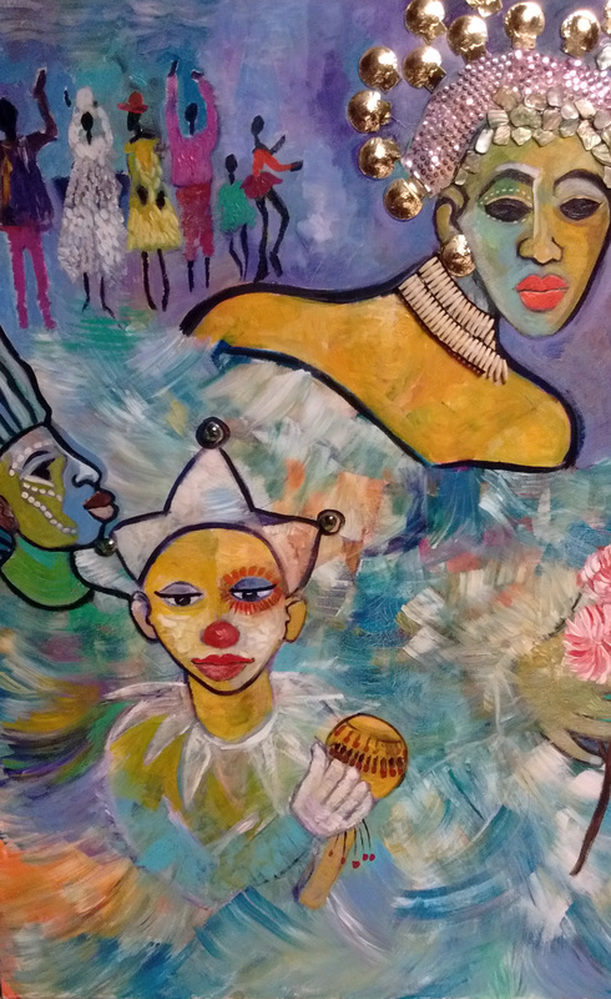 Let's Play Mas
Mixed-media piece which includes, fabric, found objects, oil pastels and acrylic paint, 36 x 48 in., 2015
​$3000
This is a colorful piece which depicts carnival in Trinidad and Tobago. The central figure is wearing an elaborate headpiece and a very decorative dress complete with sequins.

Artist Statement
It is my intention to take my audience via my mixed-media painting, "Let's Play Mas". to Trinidad and Tobago. Carnival is an event that takes place each year on the Monday & Tuesday before Ash Wednesday. According to tradition this event is characterized by exuberant celebrations and colorful costumes. Many of the participants embellish their costumes with such things as tiny mirrors, buttons, feathers and sequins just to name a few of the  unique and imaginative items that are used. On the streets folks are seen dancing, this is called "playing mas".

Everyone joins in the fun old and young alike. Included, in the fun are tourist from nearby islands and from countries as far away as England, Mexico and Rio.They are dancing to this fabulous music called  calypso. Calypso has it's origin from Kaiso and Canboulay music which was imported from West Africa. This music came from the African slaveswho worked on the sugar plantations. Through this music they poked fun at the slave mastersand it was used as a means of communicating with each other.They told stories through these calypsos which were first sung in French Creole. the storyteller was referred to as a griot I hope that the viewer will feel the excitement, and joy that I experienced while in Trinidad during Carnival.
​
Bio
Ms. Aqui –Brooks is a native Washingtonian. She has been working as an artist for
well  over forty years. She is passionate and determined to make a difference in the
world  of art. As a mixed artist her accomplishments are notable. She is a painter,
contemporary  quilt maker and doll designer.
During her artistic career Gwendolyn has been involved in more than eighty
exhibitions, these include both solo and group shows. Her awards and grants
include, but not limited to the following:
*Maryland State Arts Council’s 2002 Individual Artist Award (highest award
granted for Prince Georges County)
.*National Association of Women Artists
.* Art in Embassies Program ( purchase award)
.* Art Club of Washington (selected for a solo exhibition)
* .The Pen and Palette and Pen Award from the Arts and Letters Commission
*  Prince George’s County Alumnae, Delta Sigma Theta Sorority, Inc
* Artwork featured on Television Channel 22, “Art Works”
*  Her art quilts have been featured in 11 publications
* She received a full fellowship to Vermont Studio Center, Johnson Vermont
Gwendolyn received a BFA in Art Education from Howard University and MA
in Education/Counseling from Trinity College. She has been an art
educator both in the United States and Africa, owner/director of an art gallery,
art  therapist and a consultant.
Over the years traveling has influences her work, especially her trips to Africa,
Turkey, Italy, Greece, Virgin Islands, and Trinidad and Tobago.