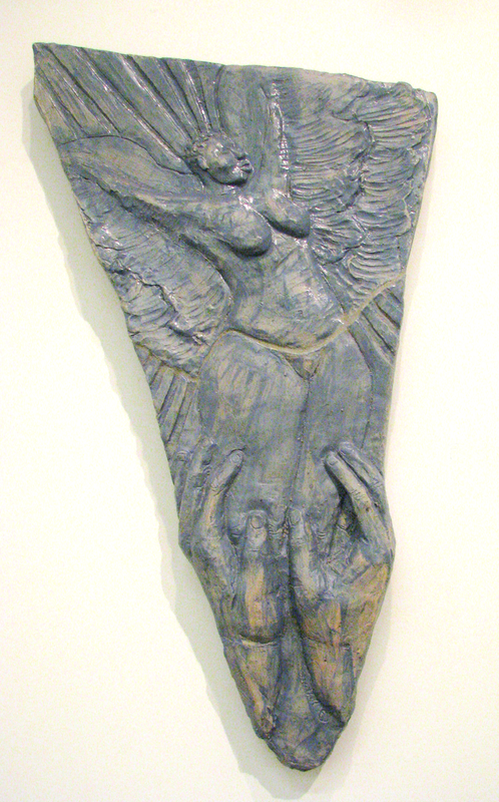 ﻿﻿Artist Statement
I would align some of my exploration of ceramic figurative imagery to the Nigerian culture. Many of the artists that I admired early in my career were very involved with the culture. ”Nigeria has the longest history in working with terracotta art with metal artcoming up second. Sculptural heads and figures in the traditional style have been found in Ife and continue to be made until the 20th century.”I have often been asked if I had family in Nigeria because of my prominent cheeks, round nose and forehead. Africa has been a creative resource for so many cultures and I find this a source of pride. In my piece, Mama, I celebrate the beauty and strength of the mother.
​
Bio
Janathel Shaw's works underscore concerns in Black America, notably, single parenting, spirituality, racism and racial pride. She uses texture, drawing, symbolism and high relief to effectively express and narrate through her work. Her work highlights the strength of the Black community.Ms. Shaw has a strong exhibit history and has been cited in numerous publications: East City Paper, Gay Blade, Studio Potter, The Washington Post, The Baltimore Sun, the Washington Times, The City Paper (Baltimore), The Washington Afro-American Newspaper, Ceramics Monthly and Ceramic Review.She currently has work on view in Red, Touchstone Gallery, exhibited in August at Baltimore Clayworks and in Alchemicals Exhibit at the Joan Hisaoka Arts Gallery, Washington, DCShe received her Masters of Fine Art degree in 1996 and her Bachelors of Science in 1989 from the George Washington University. An associate in Art degree was earned from Prince George’s Community College in 1987. She has won several sculpture and painting awards.