Light of Our Future
Exhibiting
Artist 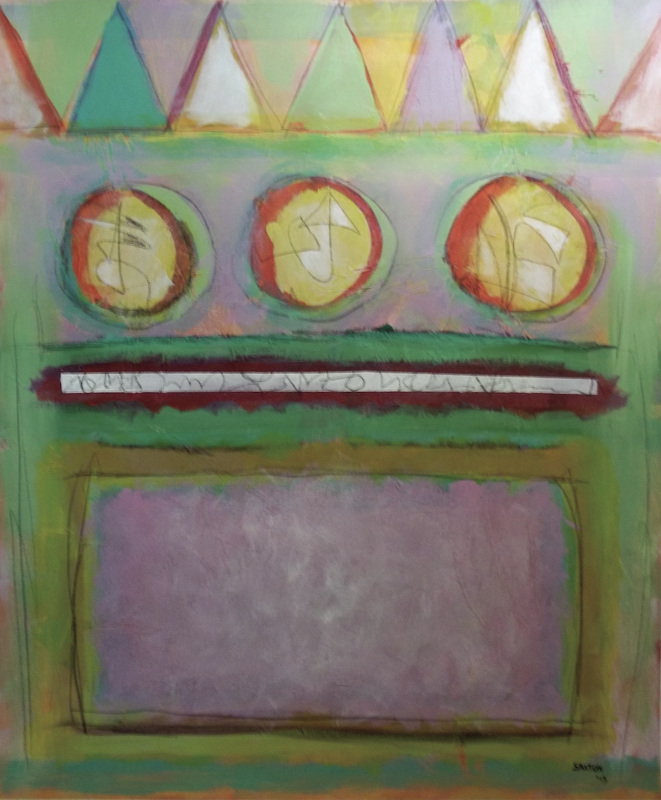 $2,000.00
Add to Cart
Mixed Media, 40 X 32 in., 2014
Larry Saxton
BIO
Larry B. Saxton is a native of Kansas City, Missouri. After an honorable discharge from the U.S. navy, he settled in Washington, D.C. Based on an impressive portfolio, he was awarded a Ford Foundation Scholarship while attending the Corcoran School of Art, where he received the BFA degree. While at the Corcoran, Saxton studied American and European artists, and became intrigued with the works of Picasso, Matisse, and Kandinsky. Inspired by Picasso’s use of line, Matisse’s use of shapes and Kandinsky’s theories of color, Saxton explored his ideals and tried to legitimize his approach to his artwork. As he navigates different canvases, whether they are mixed media or oil and brush, Saxton continues to explore the application and interpretation of line, shape and color.

Saxton’s artwork can be found in corporate and private collections throughout the country.  Saxton, who has two daughters, currently resides in Northeast D.C. with his wife, Tanyna Saxton.
​
Statement
"Art is a constant spiritual and physical movement dictated by life’s experiences. While studying at the Corcoran School of Art, I was afforded the opportunity to explore the works of Picasso, Matisse and Kandinsky. Their emphasis on depth of shapes, line and theories of color helped create the textural foundation of my work.

Washington, D.C. has a diverse art scene, inclusive of some of the country's most famous artists, including painter Charles Sebree. Sebree had a tremendous influence on my development as a young aspiring artist. Sebree challenged me to explore and understand how an artist should be concerned with space and time, and how to try and control it in. Honing in on context and practicing elements of control and authority in my work guided painting series, such as the “Religious Series,” 1984.

While pursuing a MFA degree at Howard University, I studied African art. It was refreshing and deeply self-reflexive. African art contributed to my level of self-understanding and my current conceptualization of art. Through its rhythmic yet mathematical use of line, shapes and colors, African art provided me with a connecting principle that I was looking for as an artist. The levels of spirituality and qualities of design found in my study of African art supplied the confidence and courage I needed to produce art that reflects my beliefs and interpretation of my life situated in a cultural and social world.

Art is deeply personal and interpretive in its production and consumption. In each of my series I tell a story about different moments in my life, while simultaneously providing my audiences the freedom and creative space to use art to understand and help tell the stories of their lives."

"The abstract, "Media Convergence" is my attempt to create forms of media the way I remember them in the past."
- Larry Saxton
Washington, District of Columbia